The following is a list of some of the things that have more noticeably caught my attention, reminding me that I am, in fact, living in a foreign country. Some are very subtle differences from what I know in the States, some are not... some are not just different but possibly more distinctly Swedish than others.

1. The occasional unisex bathroom
I know that maybe they pop up here and there in the States, but only maybe in some urban restaurant/club that's trying to be avant garde. As I walked through Arlanda Airport, freshly arrived to Sweden, there was something that struck me about the public restrooms there... they weren't exactly unisex and it's hard to describe but the mens and womens sections were so, I don't know, exposed to each other. And since then I have encountered many "unisex bathroom areas" that you enter and everyone can just pick whatever stall they want. When I say stall, note that it's more like a tiny closed off private room, like you'd find at Nordstroms or something. None of this swinging half door with huge visible cracks type of thing.

2. IKEA is expensive
Well, just compared to IKEA in the States. When you shop at IKEA there, it's like, "What? This is seriously only ___ dollars? It's like I'm stealing from them! I'll take 4 of these!" Here in Sweden, while IKEA is still the cheaper home goods option, my other American friend and I were more, "What? They want how many crowns for this? Not worth it! I'll eat soup with just my hands/sleep on the floor." I am exaggerating, but still.

3. Swearing and full frontal nudity on public television channels
F bombs are uncensored on MTV, naked men just splash around in the lake in old British movies... it's like HBO or Cinemax!

4. 24 hour dark
Not at all in Lund or Stockholm. But a couple weeks ago I was looking at the weather in the newspaper. In the part where they list the sunrise and sunset times for major cities in Sweden, for Kiruna, in the far north, it said this: - -
As in, not applicable. Because there was no sunrise or sunset in December up there. 24 hour dark. Yikes.

5. People smoke cigarettes
Yeah of course plenty of people smoke in the States. But in coastal California they do it even less. And in Santa Barbara barely at all. It would actually startle me sometimes to see someone light up when we'd be downtown if it wasn't very late at night and out on some far patio corner. In the library here sometimes people will leave every hour for a few minutes, heading outside... I would wonder where they went... then they'd come back and I could smell it. It's also just happening on the patios at most coffee shops and in so many other public places. I would say probably a lot less here though than in other parts of Europe, and I don't notice it much anymore like I used to.

6. Guys cut in front of girls
Hey I was headed for the bathroom door first. Hey I was headed to that shorter line for the cashier. Oh wait, you just scooted past to beat me to it, Mister. This one is kinda funny to me. It's not that frequent or anything, and there are certainly many guys who don't do these things, but when it does happen I have to keep myself from laughing out loud. I don't have a problem with it, it's just one of the more stark cultural differences between here and the U.S. I can hold open my own doors here just fine.

7. Gender portrayals in advertising
I have emerging thoughts about this, but they all started from one commercial I saw for cat food. It showed a man affectionately snuggling his cat. For a minute or two after I saw it, I was still thinking about it. Why... I wondered...I don't care about cats... but then I realized it was because I'd never seen a commercial like that before. A guy will hug his dog or something in common American commercials. But not nuzzle his kitty, with "nuzzling" and "kitties" maybe being more exclusive to females. I am increasingly witnessing how Swedish men are more cultured to be affectionate, with pets, women, and children, in ways that are less commonly witnessed in the States, but certainly not seen in commercials. Like so many other things, it comes down to the more shared gender role quality that Scandinavia is so known for.

8. An Ed Hardy store in a nice and classy area of Stockholm's old town
Oh no no no. That does not belong here. Make it stop. Don't torture this beautiful city like that.

*corinne said…
Oh no, it's there now too? Such a shame! I think Stockholm is significantly classier than Vegas though, and is much less deserving of an EH mucking it up.
January 11, 2011 at 6:03 PM

"how to win a swedish guy's heart" 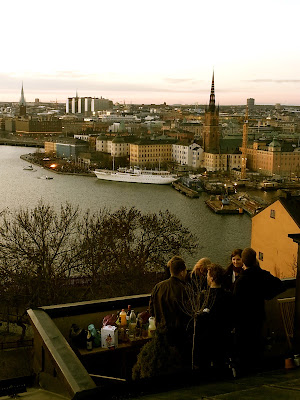 What I Got Wrong About Sweden