"how to win a swedish guy's heart"

The next installment of my discussion on Swedish and American guys...

Something I didn't anticipate when I first posted anything about Swedish guys and girls was what would happen when that post went out into the world wide web. In my site analytics I can sometimes tell what google search words lead to entering this Stockholm Stories page.

And let me tell you something... there are people around the world searching for answers and information about the mysterious creatures that are Swedish males.
The title of this post was one such google search query. I felt for the person that did the search... I understand the feeling of doing an internet search for something that there are probably no true answers for, but trying anyway.

So who is trying and what do they want to know? Some examples...

I am not sure what the worldwide rank of most internet searches by male nationality is, and if Swedes are high on that. But I have a feeling now that they are up there. Swedes are impressive travelers, no matter where you go you will find a Swede, as I have on a plane to Uganda or when river rafting in New Zealand, and then of course there were a few in Santa Barbara. So they get around. And clearly, they leave an impression.

Am I qualified to answer any of the searches from above? I can't claim that. But I do think a lot about people and how they work in general, I've read a lot of what people with experience are writing on the topic, and I guess that I and countless girls that I know have what adds up to quite a bit of experience with Swedish guys. A couple weeks before I ever even moved to Sweden, my friends and I were hanging out with a couple Norwegian guys we'd met, and as we all talked and they heard a bit about what my last two years had looked like, they tried to call me a "Swedenizer". I protested and defended myself, saying that yes I was moving to Sweden and had dated and known some Swedes but I was not limited to only that or trying only for that. Then they pointed to what I was wearing. I looked down. Damn.

It was a bright blue dress with a yellow belt and shoes. Exactly the colors of the Swedish flag. I laughed helplessly. Arguing in that moment was futile.

The point is, I will speak of my observations as best as I can at this point, knowing that I am no expert, and accepting that I am generalizing. So, in reference to some of those searches...

What are Swedish guys like?
They are polite and reserved. When sober. When drunk, they are a bit rowdy and don't think anything of bumping into girls or pushing past them to get where they're going.
They love to dance and sing almost more than any guys I've met from any country.
They are affectionate. And really tender towards and about children.
Many of them know how to cook. They are well dressed.
When you talk to them, their facial expressions reveal more of what they are thinking than non-Swedish guys. There is little "small talk expressiveness" that you would find in a conversation with an American, but I can more easily read the overall feeling and interest that a guy has about a conversation and me in Sweden when we talk.
They will check you out more easily than the guys I've grown up around in California, but unlike the men who do that in Latin America or somewhere, they won't say or do anything about it.
They, to me, seem a bit vulnerable at times. At least compared to what I know growing up in California. I don't really know how to explain this one yet.
Swedish guys are hard to read emotionally (sounds like it contradicts with the earlier point above, but now I'm talking about them more in depth), they are conflicted, and they can tend to have a hard time making the first move, and they are proud (like all Swedes, and me).

I hear over and over again from Swedish and non-Swedish girls that Swedish guys are just more confused in general. I've heard these girls say a million times to each other, themselves, me, etc. "forget figuring him out, he's Swedish." But I don't think that's the fairest blanket statement, since I know Swedish guys who aren't confused or confusing and American guys who are. I've asked a Swedish girl friend before if she thought, with all her travels and dating that she's done, if she agreed with that broad stereotype. She said, "I think that in Sweden, it's not as valued, at least compared to some other countries, especially the US, to be super sure of yourself and what you're doing. Wavering or putting off a decision for awhile or leaving things mentally tangled up is more accepted here, so Swedish guys do that in romance and don't think that it's a turn off. But as far as men everywhere go, they are probably all as equally confused inside, it's just that Swedish guys go ahead and act that way." I thought that was an interesting answer.

When a Swedish guy tells you how he feels...
Oh, does that happen? Probably, occasionally, with some of them. ;)
But I believe that Swedish men are more of an 'actions over words' breed, and that they aren't exactly cultured to know how to express what they feel very well. Saying exactly what you want and feel is not exactly a Swedish cultural value in general. A Swedish girl one time saw a message that a Swedish guy had written to a girl that said very directly "I think you are interesting, fun, pretty and I want to get to know you better." She was shocked and asked if he was really Swedish and thought that the message was actually over the top, too much. I laughed... no wonder other Swedish guys would avoid saying such direct things, if many girls here would consider it to be too much. I thought what the guy said was refreshingly straightforward. But being subtle is more the way to go here, it seems.

Things Swedish guys like...
You know what would make my answer here more interesting is if I hold back on my usual diplomacy. I don't love stereotypes. But they often come from somewhere, while still being, to many, unfair. So here, I'm going to be quite unfair for a minute. And not just to Swedish guys.

American guys? They like to wear baseball hats and too-loose pants. They like sports, almost obsessively. They like nice/big cars. They like victory.
California guys? They like to find personal success, create something, be someone. They like skinny girls... skinny equals hot. And they really like (love) California. Much more than your average person likes where they are from, and more than people who go there to live for awhile from another state.
Swedish guys? They like hair products. They like soccer. They don't like women's soccer. They like boats. They like meat. They like (love) alcohol. And they like Swedish girls. Really. They think, like many people in the world point out to them, that their country has the best looking and best dressed girls around, and they sometimes discuss when abroad how the local population just doesn't compare, and feel relieved when they get back to Sweden. And along with this, they really like (love) Sweden. Like the Californians, they can't picture anything other than ending up in this beloved country of theirs, nothing beats it. After plenty of world travel of course, which they also like. Swedish girls are the same on those two counts. That makes things convenient.

Finally... Do Swedish guys like American girls?
Well, to some extent, yes.
Swedes may take issue with a lot of things about America, but at the core they are fascinated by the country, have grown up knowing much more about it than we in the States know about any other country. Visiting the States is always on the travel list for almost every Swede I know. So often, Swedes may be more interested in meeting Americans than someone from some other countries. And particularly if you live here, it's not hard to get attention as an American girl, which is a rare find, and add to that being from California, it's downright fascinating. I've heard before when the conversation is not about me... "oh he has an American girlfriend actually" with a ever-so-slight hint of being impressed. It's familiar but still sort of exotic.
And Swedes love exotic things. There is quite a degree of homogeneity in Sweden, so sometimes it's fun for them to do or see something or date someone different. For a short time.
And then I will refer you to my point just before this. That more than the exotic, Swedes like what they know, and what they know is Sweden. Most of them believe, although they may trash talk their country and even their people sometimes, that living here is the best, and that Swedes are the awesomest. So, if I may quote a Swedish guy I know who once lived in the States... "I tried dating American girls while I was there. Where I lived there was plenty of good-looking ones. But you know what, girls in general are confusing, so if they are from your same culture it's easier since it's less confusing, you can read them better. And I know I want to live in Sweden in the future. So, I ended up dating a couple Swedes that I met when I was in the States. Couldn't help it."

Those of you who search the internet to figure out how to win a Swedish guy's heart, it won't tell you there. And I don't exactly know what to say either, since I don't think I've ever done it. And like the winning of anyone's heart, there aren't guidelines.

You know what you should figure out though, if you haven't already? How someone can win your heart. You aren't just a German girl, a Spanish woman, a Swedish girl, or a California girl. You are an individual and stereotypes may not apply. You deserve to have someone try to win your heart as much as any goodlooking tall blond guy does. Maybe more. 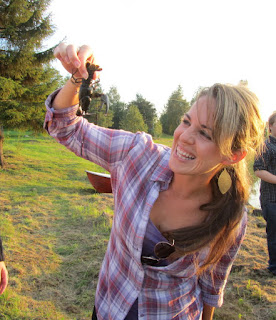 9 years in Sweden & the winds of change